Back in 1974, Redline manufactured replacement swingarms for motorcycles. Then a local bike-shop owner with a son interested in the emerging sport of BMX, bet that Redline couldn’t build a stronger and lighter BMX fork, a challenge that led Redline into the bicycle business.

According to BMX history, Redline created the first tubular-chromoly fork on February 10, 1974. It’s safe to say that this Redline invention

forever changed cycling, as heavy bladed forks would soon become things of the past. Shortly after their revolutionary fork, Redline produced their first run of BMX frames known as the ‘75 Squareback. Redline had officially entered the bicycle biz!

Since their crossover from motorcycles, Redline has been decorated with numerous BMX accolades and racing titles. And they continue to be pioneers in the BMX industry with light aluminum and even cutting-edge carbon frames.

Their high-end race models sport an oversize head tube and bottom-bracket junction and 15mm, through-axle rear hub with integrated chain tensioners. What does this all add up to? An extremely stiff, responsive bike that explodes out of the gate and leaves all of your pedal power on the track! 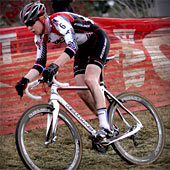 Redline has also expanded into other exciting areas of cycling. In 1994 they produced 20 prototype cyclocross frames. And before we knew it, Redline was on top of the podium in cyclocross as well as BMX. Redline's first official cyclocross team appeared in 1997.

Today Redline's tradition of innovation, quality, speed and fun can 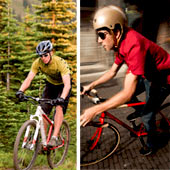 be found in every model they make. And, they build sweet bikes for just about every style of riding.

Along with fast and fun road, mountain and BMX bikes, you’ll find  easy-riding fitness and comfort bikes. All of which have been crafted for comfort and versatility for the casual ride or utility use. Redlines aren’t just for racers anymore; they're for everyone who wants to enjoy the day on a great bike!

Come by our store and we'll help you choose a sweet new Redline you'll love!